NEPO Kitchen Consulting AB  So here we go again out with 2020 and good riddance, what a disruptive and destructive year for everybody and especially for our restaurant, hotel, food and tourist related industries not only here in Sweden but over the whole world. We are resistant and flexible, at the moment our whole branch is focusing only on survival solutions. Good luck with your efforts. Here is a quick recap on my 2020.
January in Tasmania, an island rich in resources especially food and beverage products,  I feel Tasmania still hasn’t emerged as the food destination it could be. I feel that there just doesn’t seem to be the market for keeping local produce local, much of the prime produce is shipped interstate or exported, leaving a too big a vacancy for cheap, standard, frozen and convenience produce. 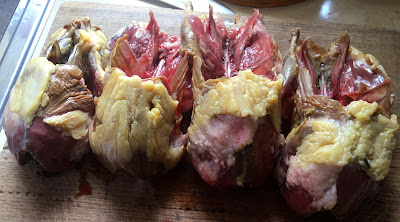 Dressed Tasmanian mutton birds
I made dish with mutton birds, chicks from the migrating shearwater, a love em or hate em taste that I’ve never seen on a restaurant menu, but in the hands of a good chef these could easily be part of a exciting Tasmanian experience. 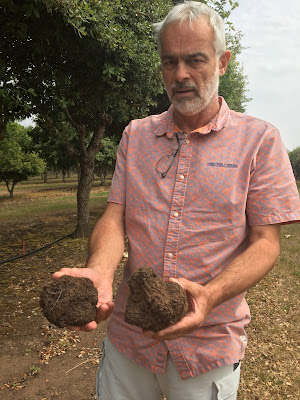 Tamar Valley Truffle farm out the back of Launceston
We dis a bit of a study visit to the Tamar Valley truffle farm where Marcus showed us some summer truffles, these truffles aren’t harvested as the dogs would choose and dig up the more pungent and immature winter truffles spores first and thus destroying the more lucrative winter season. 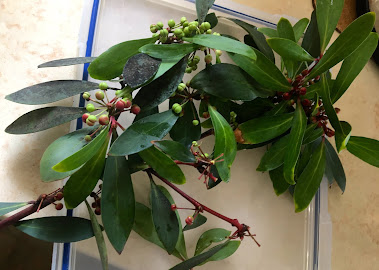 Tasmanian pepper berries/pepper features on the 2020 header photo a local native product with a peppery bay leaf tasting leaf and a spicy pepper that grows on the palate similar to Szechuan pepper.
February and back to Sweden the start of the Corona outbreak, we all thought it would pass without a fuss, a misguided thought that’s still with us. I did a few weeks at Globen in Stockholm, one of Stockholm’s modern landmarks, a globe shaped event, concert and ice hockey arena.
I was charged with the task to help improve the synergies and logistics throughout the arena, come in with some fresh insights and strengthen an already strong team, 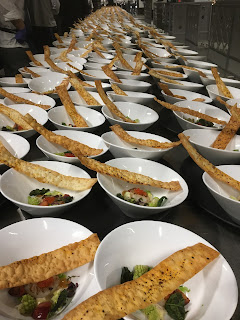 Big event "1000" starter at globen, during this time we did some plate regeneration,
a food technology in its own right.
I made many suggestions for future operations but as the corona virus started to impact the industry, the event market was reeling and Globen events as we knew it fell apart, and the rest is history.
Globen has since been been changed into a padel courts with its 15000-seating capacity collecting dust.
March Sausage day: 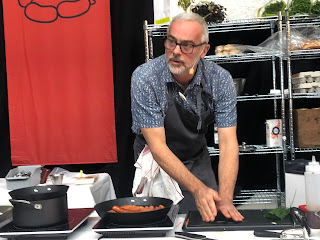 Cook off time
One of the last food exhibitions for 2020 was the annual sausage day, a popular homage to one of the best loved snack/meal here in Sweden. They have a fun cook off competition in which I participated in.
Also there was lots of networking, re grouping, idea searching and sitting around waiting for the telephone to ring.
April A change of direction: 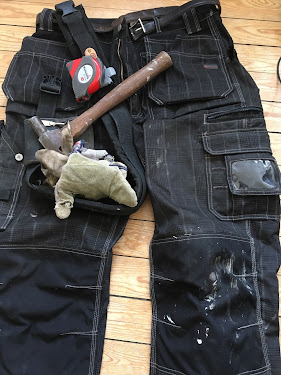 A change from my chefs’ clothes for my handyman attire.
All my pre-booked consultancy assignments for the year were corona cancelled in March and April, everything disappeared. A friend asked me to help rebuild a summer restaurant that he just bought.
“I don’t see any work possibilities in the near future, so I bought a job, was his comment”
This was his logical thinking. I jumped on board immediately. Jonas and I pulled apart his newly purchased restaurant and put it back together in six weeks. What a fun and rewarding challenge it was seeing his restaurant emerge almost as a new property after all our dirty work.
May Strand 35: 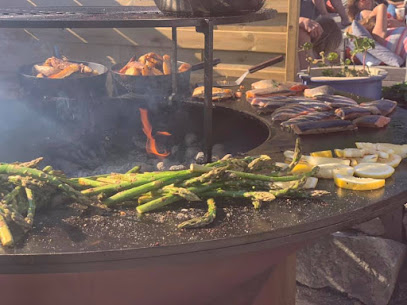 grill night at Strand 35
Strand 35 emerged into a successful summer restaurant which we opened, Jonas and his team were in front and I put together a team in the kitchen. Burgers, fries, salads and ice-cream served at the local beach. His logical thinking was a genius idea, we were only cooking and serving hamburgers and fries, but it gave our work ethics the reinforcement we needed.
June
Truffles: As the Australian winter truffle season started it became apparent that not only had Corona disrupted the top end restaurant market for Truffle, but some Danish company cornered the market with big purchases and price cuts, so a little fun contact & business that I’d had over the past couple of years went up in smoke.
During this time, I jumped ship from one summer restaurant to another, I ended up at “Kajen” an ambitious property development project with diverse food & beverage goals. “We’re going to create a destination”, A street long restaurant happening along Stockholm’s picturesque harbour waterfront.
July Kajen: 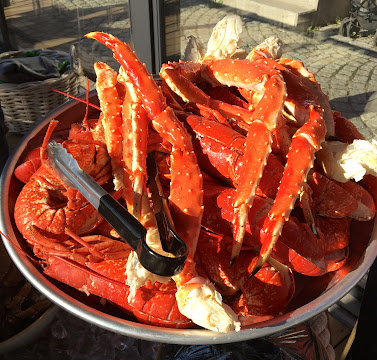 Our super nice streamliner
Saw the arrival of our stream liner caravan which we quickly transformed into a champagne and shellfish raw bar, this added a new dimension and was very popular especially with our free seating on the quay or in our pergola.
September Kajen:
We kept Kajen ticking over until the end of September, moving around some of our pop-up service units. The weather as it does in Sweden played its part, poor weather and our business almost dried up, sunny weekends and we got more than we bargained for, “in the shit” a common kitchen term that everybody in our business knows and understands.
Vanilla: 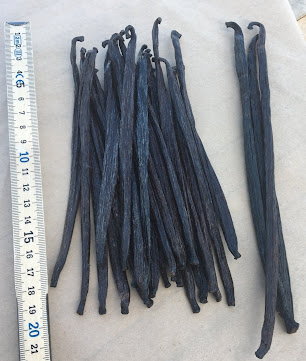 PNG vanilla
I stumbled over a vanilla exporter hoping to move Papua New Guinea Vanilla into the European market, after months of communication, research and putting together a sales pitch. I put forward my pitch to some of our local gourmet/industry/bakery suppliers, I was convinced it would be a hit even in this dire time. Alas it missed the mark, apparently all the existing French colonies which grow vanilla, “this is pretty well means all of them” are a part of France and thus members of the EU, so they have no customs, tolls, duties exchange charges ect, so good night Papua New Guinea.
October Kajen:
We packed up for the season, our weather sensitive work stations and pop up kitchens had to be dismantled and moved indoors, our fantastically loyal summer team moved away to a corona decimated hospitality industry and little or no chance of employment.
November Kajen:
Planning for season 2021 at Kajen, a more developed, bigger and more varied selection of restaurants will be added on during the winter months making our destination more complete. Kajen is now a planning & building project with a central kitchen, café, restaurant and banquet/event venue on the go. The addition of these venues will enable us to offer a more constant weather safe environment a larger venue for attracting new clientele and a destination off season restaurant, café/bar, together with our street side and waterfront pop-up units and we will be well on the way to create a new Stockholm destination.
December Sälen:
No Gran Canaris or Thailand winter consultancy visits this year but some sporadic days in Sälen at Högfjällshotell, “back on the tools”. As Sweden is grappling with the Corona virus and its effects our alpine resorts are still open “with limitations” the opportunity arose together with some friends to jump in and help during periods of hard to plan and uneven guest volumes. Högfjällshotell is an alpine resort 400km north of Stockholm. It’s a pleasure to walk into a quality kitchen if only for a limited time. 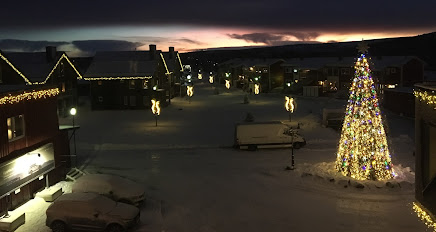 Sunrise in the mountains
all the best 2021
Labels: annual activity