Dutch Chili
Europe’s most common fresh chili. Dutch chili come in green, yellow and red. The fruit is long and narrow, the fully mature red has weak sweetness and fuller strength. These chilies are originally from Indonesia but have been developed as a hybrid by the Dutch greenhouse industry.
Strength: 2500-5000 Scoville

Güero, Hungarian wax, banana pepper
Oblong and shiny chili, used as a pickling chili in eastern European cuisine.
Originates from northern Mexico where it is used in yellow sauces and dips.
This chili can vary in strength.
Strength: 500-1000 Scoville

Jalapeño
Probably the world's most famous chili. mostly used in salsa’s. Jalapeño fits everything from bread to desserts, the taste is full and with some sweetness. Removing the seeds and the partition walls will remove approximately 70% of the Jalapeño’s strength. Jalapeño is light green, dark green or red in colour, 5-8 cm long and 2-3 cm wide. The taste is fresh, tender and full. The fruit meat is juicy. When it ripens, it turns red and tastes sweeter. Jalapeño are very popular and fits most dishes. In America, they are used in candy, ice cream and mustard. Red jalapeno is also dried and smoked. Smoked jalapeño is called chipotle.
Strength: 6000-8000 Scoville.
Origin: Xalapa (Jalapa) Veracruz in Mexico

Pimientos Padrones
A small green oblong chili fruit with different shapes, (they turn red when they ripen). Originally grown in a greenhouse in the town of Padron in north western Spain and hence the name. Padron are usually served whole, fried in a pan with plenty of oil and salt. They are a popular Spanish dish served with beer.
Padron generally have no strength or heat but the occasional one is reputed to pack a wallop, but I cant say I've ever met anyone or experienced the surprise first hand
Strength: 0 - 5000
Origin: Spain

Poblano
Similar to a regular pepper but with significantly thinner meat. Poblano are usually in green and are very popular in Mexico where they are filled, gratinated, roasted or incorporated into the mole. Poblano come from the state of Puebla in Mexico where it is the most popular chili variety. When poblano matures, they turn a deep reddish colour. The Polanco’s taste best when cooked or fried they take on a rich, hot and tasty vegetable flavour with earthy and slightly smoky aroma. Poblano is also excellent in salsa, pots, soups and pesto, but best they are filled, sk. Relleno.
When roasting, peel and cut them into strips, these strips are called rajas.
Dried red poblano are called Ancho, dried green poblano are called Mulato.
Strength: 1000 - 1500 Scoville
Origin: Puebla

Serrano
Serrano are small and oblong with a little blunt tip they are slightly narrower than Jalapeño and the most common chili fruit in Mexico. Serrano means "from the mountains" in Spanish. Serrano are excellent in salsa, guacamole and as Mexican pickles.
Green is the most common colour they have a very crispy and fresh hot taste. The ripe red serrano is a little sweeter. The pure hot flavour is perfect in hot salsas, ceviche and guacamole. Serrano are also good in vinegar and can also be roasted for more complex flavours.
Pico de Gallo and Guacamole are two typical dishes traditionally flavoured with Serrano.
Strength: 10,000 - 25,000 Scoville
Origin: The Puebla and Hidalgo mountain ranges in Mexico

Thai
In spite of its size, the little lean Thai chili has a fleshy and moderate texture and is widely used in Asian cuisine for lots of different dishes. Usually a red little chili, approx. 5 cm.
Very strong.
Strength: 50,000 - 100,000 Scoville
Origin: Thailand 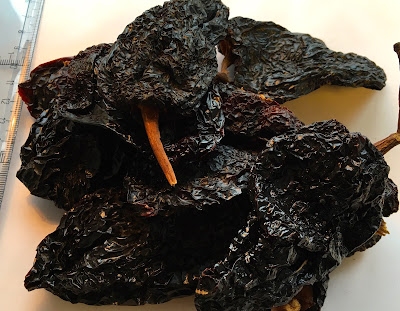 Ancho is the dark dried fruit of red Poblano.
Ancho has a composite taste of coffee, cocoa and dried fruit which makes it useful in sauces, soups and hot pots. There is another dried variant of poblano mulato from dried green poblano. they resemble ancho but are darker and have a smokier aroma and weak liquorice flavour. Both suit dishes using game, beef and pork, chicken, turkey and fat fish as well as chocolate desserts.
Strength: 1,000 – 2,000 Scoville

Cascabell
Cascabell means rattle in Spanish and it's just the seeds in the fruit that sounds like a child’s rattle when shaken. Cascabell are round with a slightly curly, nutty flavour with acidity.
Strength: 8,000 - 12,000 Scoville.

Chipotle
Are also called chipotle pepper, chipotle chili, smoked jalapeno pepper, Mecco.
Genuine Chipotle is dried when ripe & smoked.
Big red jalapeno gives a distinctly smoky taste and at the same time a little heat for stews and sauces, Relleno, etc.
Jalapeño have a high-water content and will rot on the plants if not picked when ripe, smoking Jalapeño became a preservation technique.
Strength: 2,500 - 8,000 Scoville.

The Arbol
Arbol chili are small and quite hot. They are frequently used to flavour oil and vinegar. Dried De Arbol are regularly used in soups and hot pots. Arbol are green when they are immature and turn to red when they mature.
Because they retain their fine red colour after drying, they are often used in Ristas, Chili plaits or wreaths. The Arbol is a strong chili from Chihuahua in Mexico and is closely related to cayenne pepper. It's also called Bird's Beak Pepper because of its resemblance to a bird beak.
Strength: 20,000 - 30,000 Scoville.

Guajillo
Pronounced “Wha Hee Oh”, is the most common dried chili after Ancho in Mexico.
The taste is slightly fruity, with sweet and hot berry flavours. The dried guajillo has a flat shape, thin pulp and beautiful deep red and shiny colour. Guajillo produces fine colour and composite taste in salsa, hotpots and soups.
When fresh guajillo is called Mirasol. Other names are puya, pullia, travievso and trompa. Strength: 10,000 - 25,000 Scoville.

New Mexico
New Mexico chili are usually dark red and colour but yellow, orange and brown are also available. Their flavour is earthy, slightly spicy and full of hotness with a touch of acid and sweetness. They are commonly used as flavouring in stews, soups and sauces.
Strength: 500 - 1,000 Scoville.

Habanero
The former world's strongest chili is available in yellow, orange, red and green. Habanero
means "Havana" and, despite its strength, they have a tropical fruity flavour that is appreciated by many and used in salsa and in pickles. The strongest strain of this variety is Red Savina, which has been measured to a total of 570,000 on the Scoville scale.
Habanero are sensitive to heat and should be added towards the end of cooking.
Habanero may have different names depending on where they come from. In Africa they are called Congo pepper.
Strength: Very hot. 40,000 - 500,000 Scoville.
Origin: South America

Aji Amarillo
A must have chili in traditional Peruvian food. Aji Amarillo is considered an essential part of the Peruvian cuisine together with garlic and red onions. Aji Amarillo are sometimes compared with Scotch Bonnet with a little less heat. Its thick shell, bright orange has a raisins aroma and offers a lot of fruity flavours with mango and passion fruit. For optimal taste, roast them on a frying pan with medium heat. You can also humidify them in lukewarm water for about 20 minutes but be careful not to leave it too long as it can easily get bitter. With its unique flavour.
Aji Amarillo is considered a true Latin American Chile.
Strength 1,000 - 30,000 Scoville.