Vendace roe, one of the local specialties here in northern Sweden and one of our biggest sellers at Clarion Hotel Sense in Luleå. Served traditionally with soured cream, in this case whipped crème fraiche and chopped red onions garnished with dill and lemon, hot toast is served on the side as an accompaniment to make your own starter, these simple ingredients are served as a starter throughout Sweden. Vendace roe is served with different combinations such as blinis, potato pancake ect.
Vendace roe from the Kalix area just north from Luleå has recently been granted a "DPO", protected designation of origin seal.
If frozen, which is often the case as the fresh roe is only available during the spawning run, vendace roe should be thawed out slowly, all care should be taken to handle or work with the roe as little as possible, thus keeping the individual eggs whole, the roe should be almost dry and stick together, the locals up here say that genuine Kalix roe can be tilted to 90 degrees in a spoon before the roe slides of.
Vendace roe is often called bleak roe in Sweden which is the wrong translation, vendace belong to the salmonoid family and bleak to the carp fish family, as neither of these species are a major food species in the English speaking world then the correct translation has also been overlooked for many years. 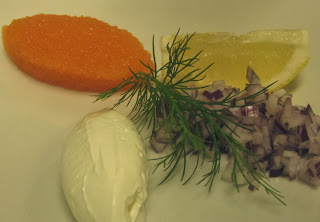