The next big match, only a few days after Sweden won 2-1 over Austria.
What an atmosphere, I managed to see the last three seconds of the match the whole arena erupted, Sweden with that win moved into the play off round "best of the second places" to qualify for Brasil world cup next year.

On Tuesday we are hosting Sweden - Germany with only pride as motivation, it should be a great game, The arena is sold out again with over 50000 spectators.

We'll be preparing 6000 plated and buffet meals, all thirteen kitchens are open, all restaurants and banqueting rooms are fully booked, we took a bit of a battering during the Austria match so we'll be looking for a bit of revenge on Tuesday. 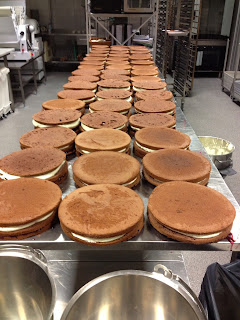 We've chosen the busiest night ever to try out "new Arena Food" a concept idea promoting local produce and healthier food alternatives to hot dogs and hamburger, it will be interesting to see how the concept pans out, we'll be preparing 1000 special boxes. Our "away team menu's" will be featured again this match with some traditional German food, one sweet that is as much liked in Sweden as in Germany as well as the rest of the world is the schwarzwald torte, if its half as good as last weeks Sacher I'll need to jog two laps around my little track next weekend.
Aufwiedersehen