Friday the 22 we hosted the Sweden - Ireland world cup qualifying match,
The arena was sold out again, 55000 showing what a fantastic venue it is even with its controversial close able roof.
"The Irish wanted to play with the roof open, I think they only wanted to make it uncomfortable for the spectators"
Being able to host such large scale events when we're still in the grip of a drawn out winter shows what a great investment friends arena is.
I didn't see much of the match, a few minutes only, great atmosphere, the swedes were very disappointed that it was only 0-0 and you could feel it in the air even before half time.

We had a big day in the kitchen, we specially imported some Irish produce to flavour up the menus, we try and incorporate some of the away teams food in the menus with each match for Ireland we imported fresh crab meat from Carrs seafood, Galloway oysters from Kelly's, Tullmore dew flavoured smoked salmon from Burrens smokehouse, Irish beef & lamb through our local suppliers Dafgård, cheese from Sheridans cheesemongers, a big thank you to you all, as well as to Bord Bia who helped co-ordinate the deliveries together with Leröy.

We had about 4000 sit down dinners and another 4000 fast food meals where the kitchen was directly involved in the production and delivery of the meals. About 48 chefs in place on the day.
For each major event the structure and logistical challenges are clearer we are putting more and more effort into transport and delivery around the stadium, its a huge stadium with lots of individual F&B outlets each with their own special needs.

We've had to find an alternative oyster presentation that reflects Ireland, a lightly poached oyster on a little horseradish creme fraiche with leek julienne, Guinness sauce and fresh seaweed, it will be interesting to see what the Irish think.

The other option is 4000 raw oysters on the buffet, that's tough we'll have to open them any way but by poaching them we'll be able to do it in advance.

During the Sweden Ireland match we had a visit from Michael Moran, the Irish, European and world oyster opening champion. Michael was going to help us open 3000 Galway oysters in our banquet room on theVIP buffet.
Michael is from Moran's Oyster Cottage a 300 year old family run oyster and seafood restaurant in Kilcolgan, Galway on Ireland's west coast.
What a guy, "hey Michael we need to open 800 oysters for the buffet - oh only 800 I can stand there and open them a la minute"
Us normal cooks and chefs carry around a bulging knife roll with all sorts of newfangled knives and equipment, Michael has the bulging roll filled with oyster knives similar to stilettos, daggers, and street fighting weapon's he must of been at least four times faster than any of us, all the time talking and entertaining us, we were all concentration and focus on the task in front of us and all the while trying not to slice into our hands, Michael didn't even work up a sweat.
Michael is such a nice guy I bet he would never admit to pacing himself so we didn't feel so bad. 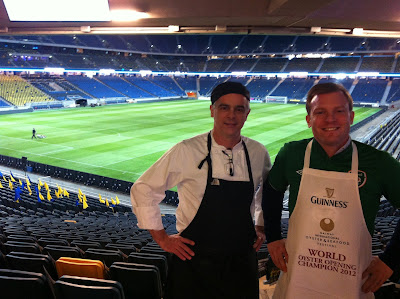 Michael Moran and yours truly before the Sweden Ireland match 22 march 2013 friends arena, before the arena started to fill and before Michael opened most of our oysters. Friends Arena in Stockholm celebrating st Patrick's day in all of its green splendour, a bit of a marketing coup together with enterprise Ireland but I must admit it did look pretty impressive against our icy spring back drop.