preparing for the bandy final at friends arena 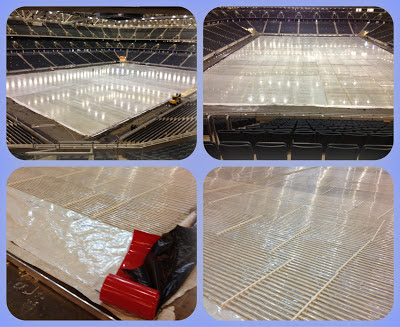 13 3 2013, current progress with the ice rink preparations for the coming Swedish Bandy championship this Sunday.

We're expecting 40000+ spectators, a new spectator record for bandy.
For all of us who don't know what bandy is, Bandy is a predominately Nordic sport, similar to land hockey but played on an ice rink the size of a football pitch, due to the size of the pitch bandy is normally played outside this could be one of the first in house matches,
Traditionally Swedes eat pytt i panna, "Swedish Hash" served either creamed or plain pan fried and served with beetroot and fried egg at bandy matches. we've bought up big time 1,6 ton pytt i panna & 6000 eggs that should do the trick, hope the best team wins.